Pastor Lukau Scam EXPOSED…..'Resurrected' Man Was Not Really DEAD But ACTING
A South African Pastor, Alpha Lukau is making waves on social media after a video of him resurrecting a man from the dead went viral on social media. Our team analyzed the footage and came to the conclusion that this was a fake miracle and here is why!
1. Firstly when a person dies, their system ceases to function, cheeks collapse and the skin darkens. The undertaker stuffs cotton into the deceased’s nose and cheeks to make the corpse look more natural. Eyes are also sealed shut and involve a lot of undoing to get them open. Looking closely at the pictures the resurrected man does not seem irritated by the foreign objects that would have been placed within him during embalming. He just stands up and breathes normally as if nothing ever happened. What happened to the cotton??
2. The ‘dead’ man in the pictures below has his mouth open, the undertaker would have made sure to close the deceased ‘s mouth.  The chap in the pictures was breathing through his mouth look closely.
3. For a person that is supposed to be dead, his skin looks very much lively and full of life. Undertakers remove the blood and internal organs during embalming hence the reason for the discoloured look. This does not appear to be the case with this ‘resurrected’ fellow.
4. Given that the deceased is alleged to have been dead for three days, there is no way he would appear as shown in the pictures.
5. The facial reactions from people around the pastor give away the plot, they don’t appear shocked or surprised. They too were part of the plot.
The Funeral parlor alleged to have handled the deceased is distancing itself from the miracle and threatening legal action.
Given the above evidence, gullible Christians were taken for a ride yet again. This miracle was stage-managed and a means to raise Lukau’s popularity. 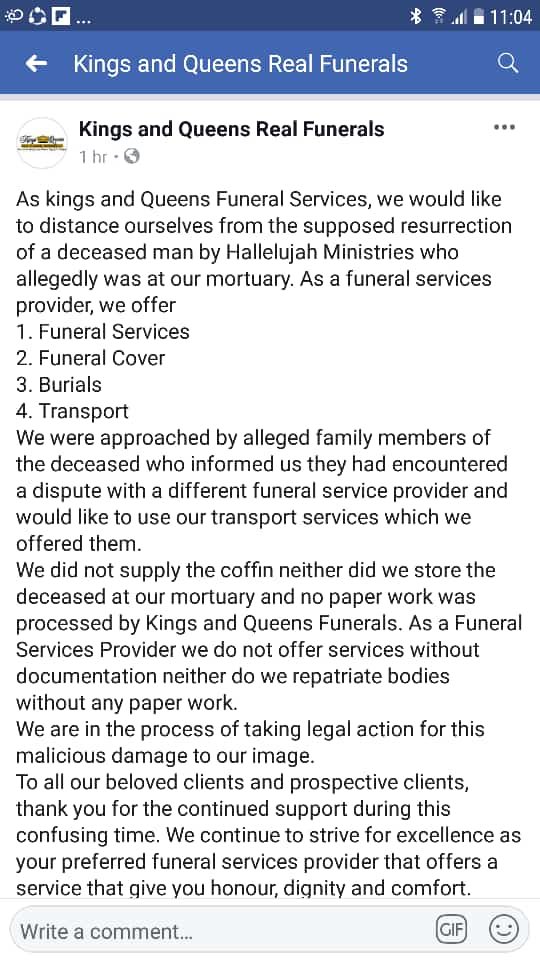